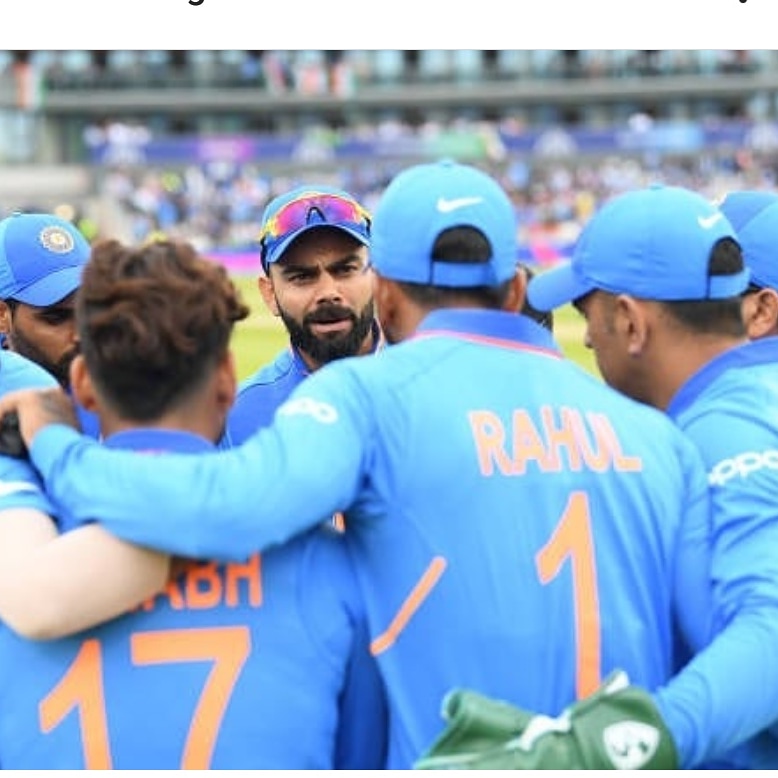 Virat Kohli admitted it is ‘difficult to accept’ India’s shock World Cup exit after they suffered an 18-run defeat to New Zealand in the semi-final at Old Trafford. Chasing 239-8, India were bowled out for 221 despite Ravindra Jadeja’s brilliant 59-ball 77. Kohli’s side recovered from 5-3 to 208-6 but fell just short, with Matt Henry finishing with three wickets. ‘The first half of the match we were very, very good. We were spot on with the ball and in the field,’ Kohli said. New Zealand produced a brilliant performance in Manchester . ‘We thought we had restricted them to a total we could chase but the way they came out and bowled in the first half-an-hour was the difference. ‘We knew we had a good day in the field. We were proud of that effort. But the credit has to go to New Zealand’s bowlers. ‘They were outstanding. The skill level was on display for everyone. They made it very hard for us.’ Kohli added: ‘I think Jadeja had an outstanding game, the way he played was a great sign and shows what he can do for this team. ‘You always feel disappointed when 45 minutes of bad cricket puts you out of the tournament. It’s difficult to accept and comes to terms with, but New Zealand deserved to win.’ India fell narrowly short as they exited the World Cup .New Zealand only posted 239 thanks to half-centuries from Kane Williamson and Ross Taylor. Kiwi captain Williamson said: ‘It was a really tough match and I’m very proud to finish on the right side of it. ‘The guys were really clinical in that middle to back-end stage of our innings; there were a lot of contributions in this match that went a long way to getting us across the line. ‘It was a great start from the bowlers but we knew that as it slowed up it was going to be a tight squeeze. ‘India are a world-class side but the heart we showed was outstanding.’

Virat Kohli defended MS Dhoni after the India veteran was criticised for his performance in the World Cup semi-final defeat to New Zealand. Dhoni has endured a mixed World Cup, with a number of his innings drawing criticism from Indian fans. He scored 50 off 72 balls at Old Trafford on Wednesday as India lost by 18 runs. Asked whether Dhoni’s strike-rate was an issue, Kohli said: ‘Well, look, it’s always, you know, a safer option to look at it from outside and say, “Maybe this could have happened”. ‘But I think today he was batting with Jadeja and there was only Bhuvu to follow after so he had to hold one end together in my opinion. New Zealand beat India by 18 runs in Manchester . ‘And because Jadeja was playing so well you needed a solid partnership and to get a 100 partnership from that situation I think it had to be the right balance of one guy holding an end and Jadeja playing the way he did, his knock was outstanding.