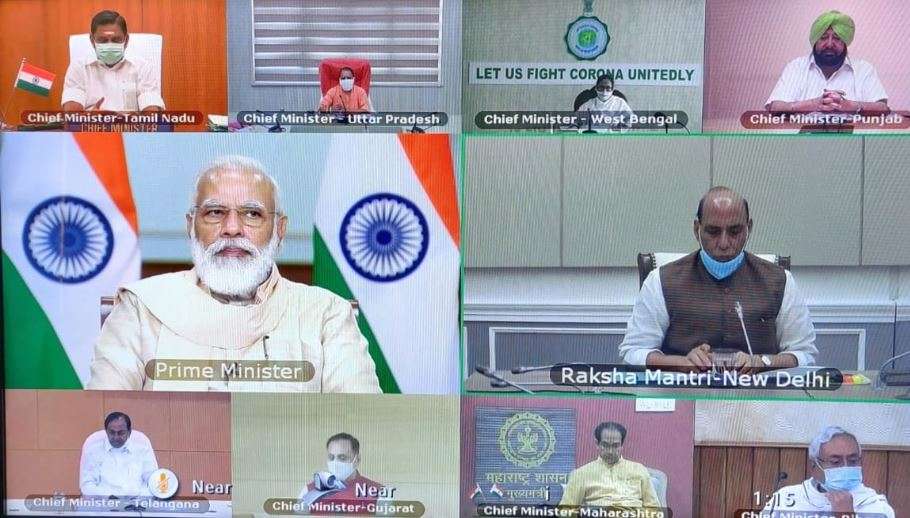 CMs give update on the flood situation and rescue efforts made; compliment the efforts of central agencies including NDRF in timely deployment and rescuing people

Prime Minister Shri Narendra Modi held a meeting today through video conference with Chief Ministers of six States, namely Assam, Bihar, Uttar Pradesh, Maharashtra,  Karnataka and Kerala,to review their preparedness to deal with south-west monsoon and current flood situation in the country.The meeting was also attended by Defence Minister, Health Minister, both the Minister of State in Home Affairs, and senior officers of the concerned central Ministries and organizations.

Prime Minister emphasized on better coordination between all central and state agencies to have a permanent system for forecasting of floods and extensive use of innovative technologies for improving forecast and warning system.

Prime Minister said that over the past few years, our forecasting agencies like India Meteorological Department and Central Water Commission have been making concerted efforts to make better and more usable flood forecasts. They are trying to provide not only rainfall and river level forecast but also location specific forecast of inundation. There are pilot efforts underway to also use innovative technologies such as artificial intelligence to improve locations specific forecast, for which States should provide necessary information to these agencies and timely disseminate the warnings to local communities.

He mentioned that investment should be increased in localised early warning system so that people in a particular area can be provided with timely warning in case of any threatening situation such as breach of river embankment, inundation level, lightning etc.

Prime Minister also emphasized that in view of COVID situation, while undertaking rescue efforts, States must ensure that people follow all health precautions such as wearing of face mask, hand sanitization and maintain adequate physical distance and relief materials must include provision for hand washing/ sanitizing and face masks for the affected people. In this regard, special provisions should be made for elderly people, pregnant women and people with co-morbidity.

He further conveyed that States should ensure that all development and infrastructure projects must be built with resilience to withstand local disasters and to help in reducing consequential losses.

Chief Ministers of Assam, Bihar, Uttar Pradesh, Maharashtra, Kerala and Home Minister of Karnataka gave update on the flood situation, rescue efforts made in their respective States. They complimented the efforts of central agencies including NDRF teams in timely deployment and rescuing people. They also gave some suggestions for short-term and long-term measures for mitigating the effects of floods.

Prime Minister directed the Officers of concerned Ministries and organisations to take action on the suggestions given by the States and assured that the Centre will continue to provide its support to the States and Union Territories in order to strengthen their capabilities for dealing with various disasters.