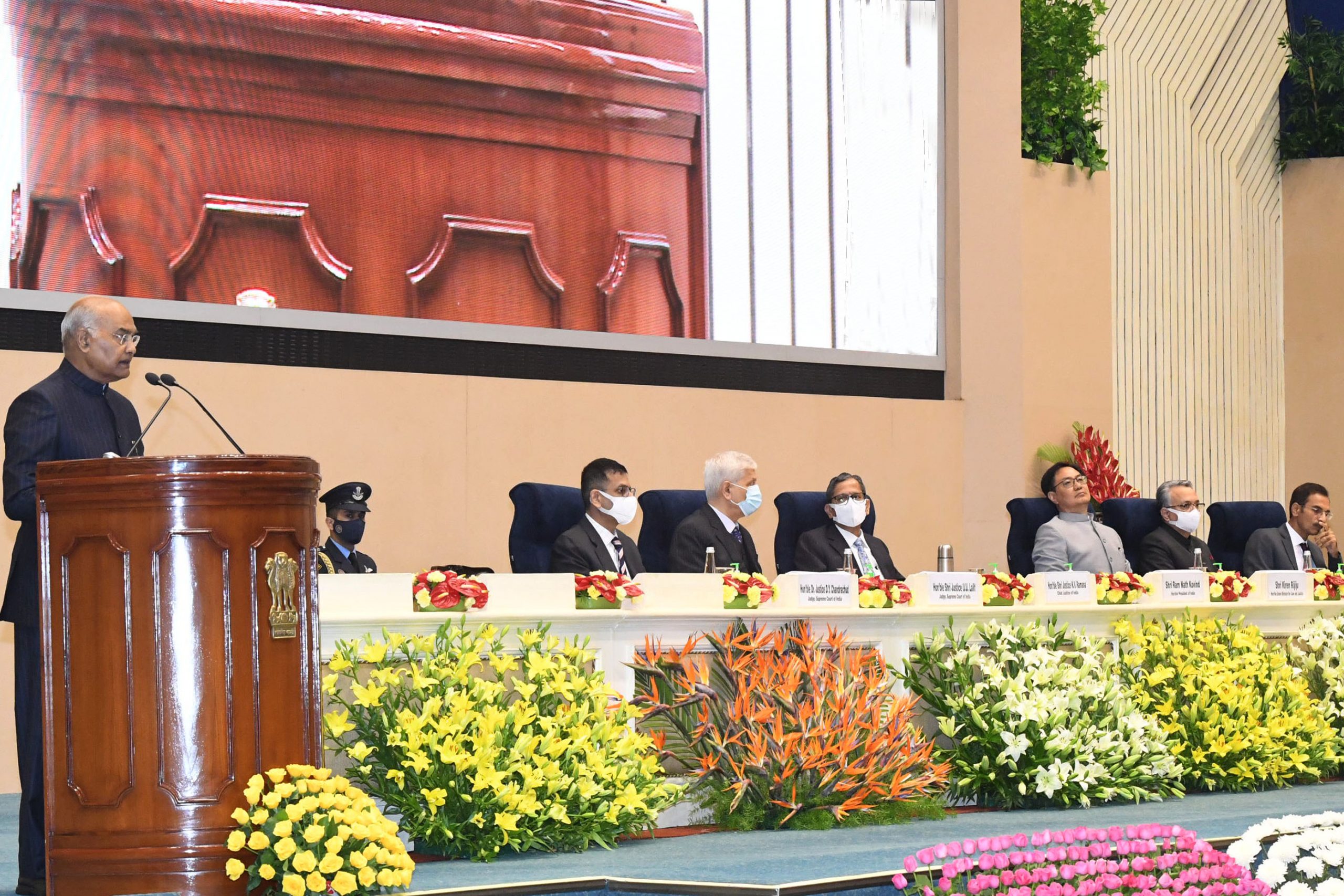 New Delhi, 27th November: “Constitution Day is a great festival of our democracy. It is a day to reiterate our debt to the known and unknown men and women who made it possible for us to lead our lives in a free republic. It is also a day to reiterate our commitment to keep walking on the path they forged for us”, said the President of India, Shri Ram Nath Kovind. He was delivering the valedictory address at the Constitution Day Celebrations, being organised by the Supreme Court of India to commemorate the adoption of the Constitution of India in New Delhi today (November 27, 2021). 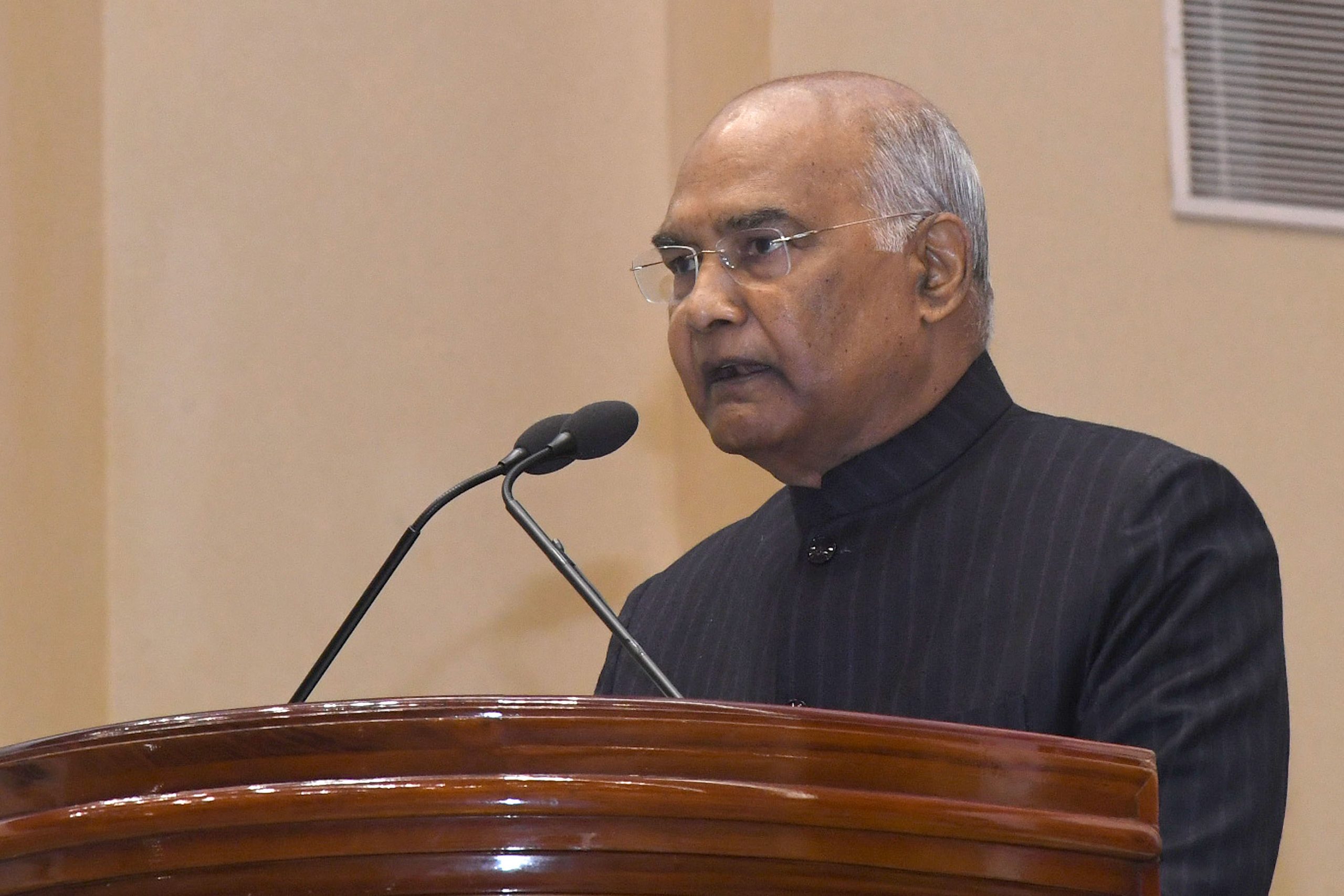 The President said that the Constitution is the roadmap of our collective journey. At the core of it are Justice, Liberty, Equality and Fraternity. The Preamble expands the notion of justice to include its social, economic and political aspects. That is what the Constitution wants us to secure for all citizens of India. Justice is the critical fulcrum around which democracy revolves. It gets further strengthened if the three institutions of the state – the judiciary, the legislature and the executive – are in a harmonious existence. In the Constitution each institution has its defined space within which it functions.

The President said that in Indian tradition, judges are imagined as a model of rectitude and detachment more akin to ‘sthitpragya’. We have a rich history of legions of such judges known for their utterances full of sagacity and conduct beyond reproach, which have become hallmarks for the future generations. He was happy to note that the Indian judiciary has been adhering to those highest standards. He said that there is no doubt that the judiciary has set for itself a high bar. Hence, it is also incumbent upon the judges to exercise utmost discretion in their utterances in the courtrooms. Indiscreet remarks, even if made with good intention, give space for dubious interpretations to run down the judiciary.

The President said that we are legatees of an illustrious history in which legal luminaries not only shaped the national movement but also created a prototype of a selfless public figure. Right from the beginning, the judiciary consistently conformed to those highest standards of conduct while discharging its responsibility. In people’s view, it is the most trusted institution. He said that it pains him no end, therefore, to note that of late there have been cases of some disparaging remarks against the judiciary made on social media platforms. These platforms have worked wonderfully to democratise information, yet they have a dark side too. The anonymity granted by them is exploited by some miscreants. He expressed hope that this is an aberration and it will be short-lived. He said that he wondered what could be behind this phenomenon. He asked if we can collectively examine the reasons behind it for the sake of a healthy society.

Speaking about the cost of justice, the President said that in a developing country like ours, a very small section of the citizens can afford to knock on the doors of the court of justice. From lower courts to the Supreme Court, it becomes increasingly difficult for an average citizen to seek redressal of grievances. He said that there are individuals and also institutions that offer pro bono services. The Supreme Court too has taken praiseworthy steps in this direction. He wished to see increased access to legal aid and advisory services for all. He said that it can take the form of a movement or the form of a better institutionalised mechanism.

Pointing to the long pendency of cases, the President said that all stakeholders appreciate the enormity of this challenge and its implications. He said that he knew much has been written about it, and pertinent suggestions have been made to address the issue. Yet, the debate continues and the pendency keeps increasing too. Ultimately, the citizens and organisations that have grievances bear the brunt. The issue of pendency has ramifications for economic growth and development too. It is high time all stakeholders find a way out by keeping national interest above all. Technology can be a great ally in this process. He noted that the Supreme Court has taken numerous initiatives in this regard. The pandemic has hastened the adoption of information and communication technology in the domain of the judiciary. He expressed confidence that young minds in this field would further propel the use of computers and the internet to serve the cause of justice and to serve the citizens.

Tags: PRESIDENT OF INDIA GRACES THE VALEDICTORY FUNCTION OF THE CONSTITUTION DAY CELEBRATIONS ORGANISED BY THE SUPREME COURT OF INDIA