Bengaluru: President Ram Nath Kovind has inaugurated ISKCON Sri Rajadhiraja Govinda Temple and cultural complex in a Lokarpana ceremony in Bangalore. He was accompanied by the First Lady Savita Kovind. This project is a tribute to Srila Prabhupada in commemoration of his 125th birth anniversary. 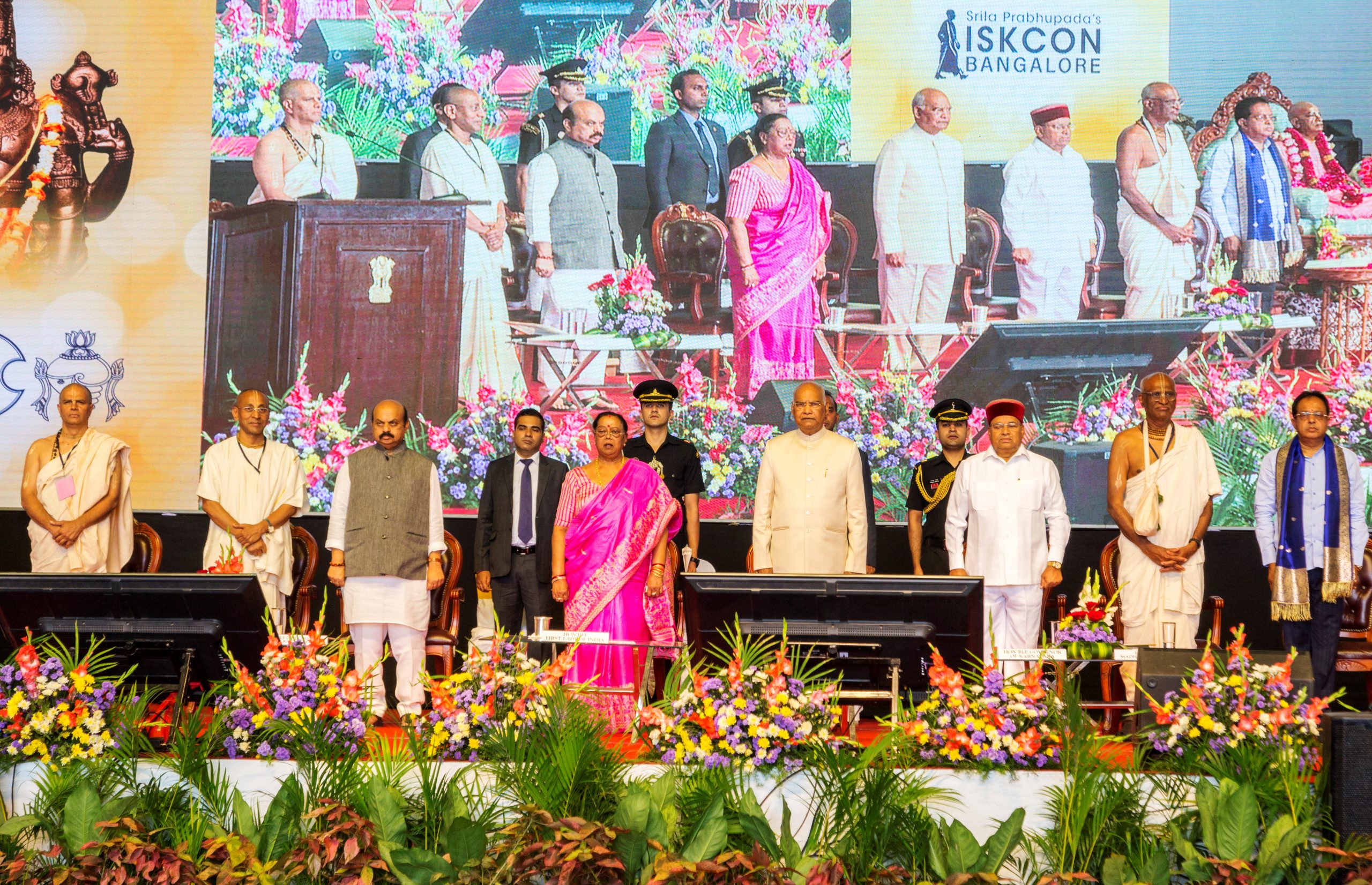 Thawar Chand Gehlot,Governor of Karnataka, Basavaraj Bommai,Chief Minister of Karnataka and MLA Krishnappa were also present at the event. Following the Lokarpana, dignitaries visited the shrines of Rajadhiraja Govinda and other deities in the temple. 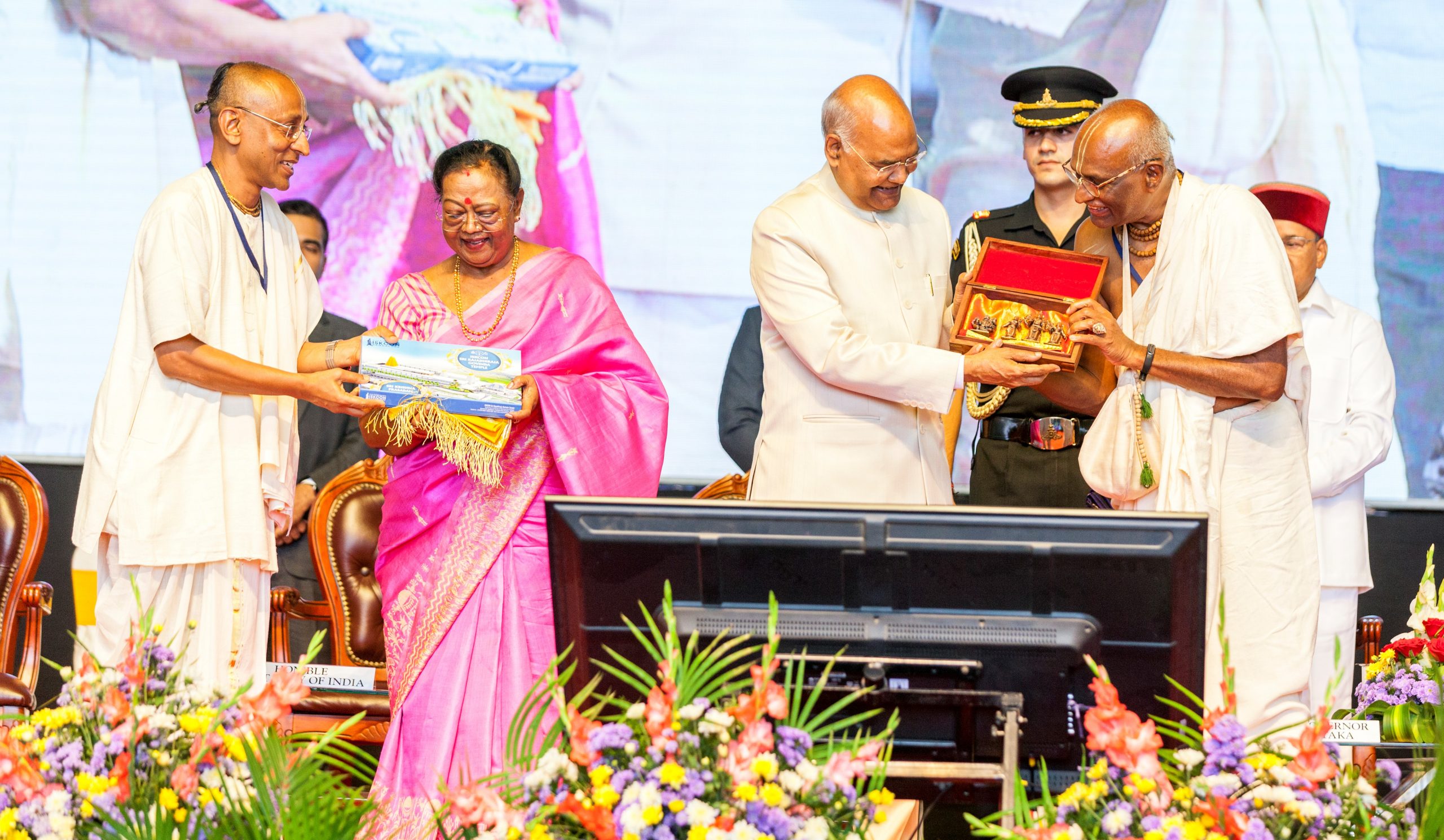 President Ram Nath Kovind said, “ISKCON Bangalore has made a positive difference in the lives of lakhs of people for the last 25 years. I congratulate Sri Madhu Pandit Dasa on the occasion of Lokarpana of ISKCON Sri Rajadhiraja Govinda Temple. Due to his spiritual strength and exemplary leadership, many of Srila Prabhupada’s desires are being fulfilled. The exquisite deity of Sri Rajadhiraja Govinda is a replica of Lord Balaji. The same Lord has now descended on this Vaikuntha Hill in Bangalore to receive our worship and bestow His blessings. My best wishes to the dedicated members of ISKCON Bangalore to increase their humanitarian interventions in the coming years.”

Thawar Chand Gehlot,  Governor of Karnataka, remarked, “This temple is a fitting tribute to the glorious legacy of Srila Prabhupada on the occasion of his 125th birth anniversary. I am confident that Sri Rajadhiraja Govinda Temple and cultural complex will systematically channel people’s energies to facilitate a positive transformation in society.”

Basavaraj Bommai, Chief Minister of Karnataka, said, “Bhakti movement means change within and change for all. This movement is a unique contribution of India to the world. ISKCON Bangalore is providing a great heavenly abode to the world, especially India, to develop our consciousness and meet the Lord through the Sri Rajadhiraja Govinda temple. My Government always stood by all the humanitarian activities of ISKCON Bangalore and will continue to do so in the coming years.”

Sri Madhu Pandit Dasa, President, ISKCON Bangalore, expressed gratitude to the President of India for dedicating the temple and cultural complex to society. He also thanked other dignitaries for their gracious presence. Speaking on the occasion, he said, “ISKCON Sri Rajadhiraja Govinda Temple has been inspired by Srila Prabhupada’s desire to build a grand temple like Tirumala. This centre will attract devotees and pilgrims from different parts of the country. There will be amenities for a large number of people to have comfortable darshan, and the Nitya Annadana hall will serve meals to all visitors. The campus will also provide spiritual and cultural education for children, youth and families. We are committed to serving all sections of society through this grand temple. I thank all the donors, patrons and well-wishers of ISKCON Bangalore who have solidly stood behind us for over four decades in our service to humanity.”

The temple will be conducting elaborate ceremonies and sacred rituals according to Vedic traditions in the coming weeks. Hence, the campus will be fully open to the public from August 1, 2022.